I spent this past weekend at Ashley’s cottage in Michigan with six of our dearest friends from college.

Since graduating in 2006 (’07 for some of us!), us girls have taken a “girl’s trip” at least once a year.  Ash, Pratt, Shep, Nash (left to right) and I lived in the dorm together freshman year at Ohio State (B-3 baby!), and have been the best of friends ever since.  We happily picked up Caitlin and Jackie along the way (left and right of me, respectively), as well as Pam and Stacy (we missed you!).

Talking to others, it’s become apparent just how fortunate and rare it is to maintain such close friendships throughout the years.  Many people aren’t so lucky to meet such wonderful friends on their dorm room floor, and even if you manage to leave college with a tight knit group of friends, it is tough to endure the test of time.  People move, keeping in touch becomes harder, schedules fill up, some have babies while others remain single.  Things just…change.

But I’ve never been one to let life just happen to me.  On the contrary, the O-HI-30 life is about grabbing life by the balls and making the most of what you have.  And just like most worthwhile things, friendship takes work.  These great friendships didn’t remain in tact simply by chance – they are a product of real, meaningful effort on all of our parts.  Despite all the moving, post-graduate degrees, relationships, marriages, and four-legged friends, we’ve managed to stay as close as we were sitting on the dorm room floor of Bradley 319, eating Shep’s Mom’s queso dip and gossping about boys.

The annual girls trip takes a different form each year.  We’ve done Vegas twice (once for fun, once for Pratt’s Bachelorette Party – that was interesting), rented a cabin at Hocking Hills, bet on horses at Keeneland (Ash’s Bach party), took pole-dancing lessons in Pittsburgh (Cait’s Bach party), and, most recently, partied it up in South Beach.  This year, we decided to keep things low-key (and affordable) and drive to Ash’s parent’s lake house – or “cottage” as they call it – in Southern Michigan.  I’ve been fortunate to be a guest at the cottage many many times over the years, and it never disappoints.

We didn’t know it at the time, but selecting the cottage as the location of Girl’s Trip 2014 ended up being the perfect choice.  Why?  Because Pratt is now seven months pregnant!  Miami and Pregnancy do not go together, but Cottage and Pregnancy most definitely do.  Pratt is the first of the original dorm crew to start a family (Stac has a beautiful baby girl), and we were so excited to spend some time with her before her family of three (her husband Tony and Crosby, the dog) becomes a family of four this September!

Ash’s Mom had the brilliant idea of throwing Pratt a suprise baby shower.  And suprise her, we did!  When Pratt saw the sign for a “baby shower” on the door, she said, “Oh, a baby shower” before realizing a moment later that that shower was for her!

Shep came up with two fun games for us to play:  Match the Celebrity to their Baby’s Name, and The Price is Right.  I was AWFUL at the celebrity game (as in, I got 2/20 right, one was a pure guess and the other I cheated off Nash), but I proved myself as a savvy shopper by tying for the win with Jackie in The Price as Right.

When we weren’t showering Pratt with homemade baby food kits and adorable onesies, we were drinking wine (even the mama-to-be enjoyed a few sips – just a few!), laughing about boys from years past and teasing each other mercilessly, and eating.  Lots of eating.  There is never a shortage of excellent food at the cottage, and Ash’s Mom’s baked beans remain the star of the show for me, year after year.  This was Saturday night’s spread, consumed at 10 PM since lunch was consumed at 3:30 PM.  Ah, lake life. 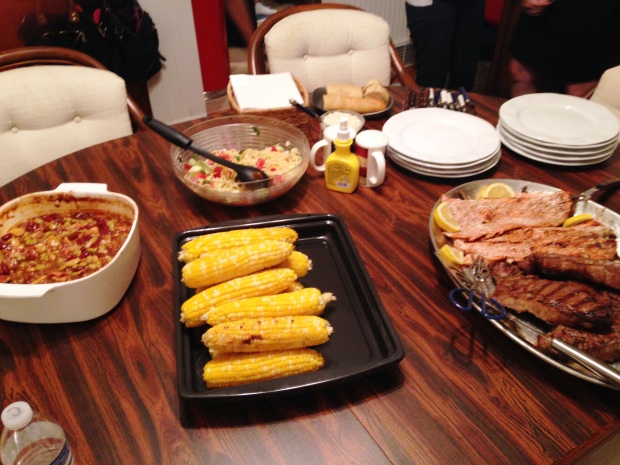 I was very sad to see the weekend come to an end.  Less than 48 hours is simply not long enough to spend with your best girlfriends from college.  No matter how long the trip, it never seems long enough, and this one felt particularly short.  But the one thing I can say with 100% certainty is that there will be a 2015 girl’s trip.  It may look different, and it may involve a baby (!), but it will happen in some shape or form.  And the same can be said for 2016 and 2017…and 2034.