Hi O-HI-30 readers!  I hope you had a wonderful Fourth of July weekend!

Confession:  I didn’t take this photo of Red, White & Boom.  In fact, I didn’t even see fireworks this year, except while on the highway!  Instead, I exercised a lot, slept a lot, and generally relaxed over the three-day weekend.  It wasn’t a typical Fourth of July for me – I’m usually out of town, taking advantage of a long weekend.  I had planned to go home and enjoy the Bay pool with my Mom, but when Karen recently fell and broke her arm, requiring surgery and leaving her quite banged up, my Mom decided to show off her skills as a caretaker and spend the weekend in Columbus.  Karen is doing pretty well, all things considered, and it was nice to spend the weekend just hanging out together.

The weekend started off Thursday night with a date with this lovely girl!

Jackie and I decided to go on a romantic date at the most romantic restaurant in Columbus: Basi!  Basi has a long history of romance; Ashley and Johnny got engaged after dinner there, and I’ve had my own fair share of romantic dates over their red wine and candlelight.  Perhaps the best part about Basi is that it’s as romantic in the summer as the winter.  As cozy as the inside of the restaurant is, the patio is equally charming.

The atmosphere is second only to the food – or maybe it’s the other way around!  We opted to share three appetizers, and ended up with more than enough food.  Don’t get me wrong, the entrees are excellent, but there is just something fun about sharing appetizers with a girlfriend!

We went for the zucchini pronto, mussels, and toasted pistachio flatbread.  All were outstanding, but there is just something special about the zucchini – it’s SO GOOD.  Light, fresh, flavorful – my mouth is watering just thinking about it.  If you’ve never had it – get your butt to Basi ASAP! 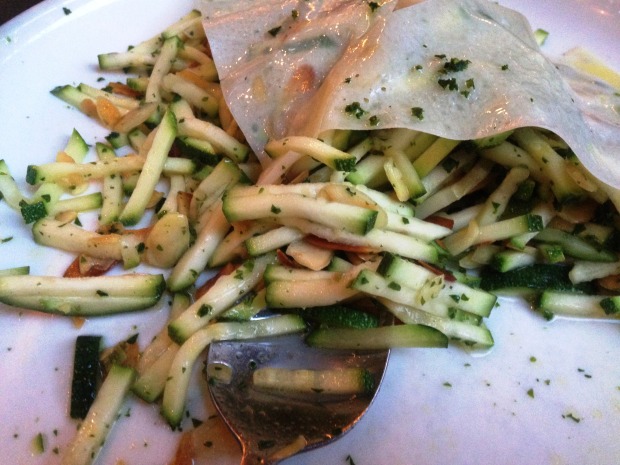 Thanks for a lovely date, Jackie!

Friday morning was spent struggling through a “long” run.  I’m trying to actually train for my Olympic triathlon this year, but I think I bit off more than I could chew after 2+ weeks of not running.  Big thanks to my fellow Girls on the Run coach Amy for helping me through it and for introducing me to Nuun, a natural alternative to Gatorade (I hate the stuff).  Note to self: learn more about race hydration and nutrition!

The next morning, I set my alarm for 6:45 AM and hit the road bright and early to join up with the cyclists of Columbus Outdoor Pursuits (COP)!  I knew I needed to get in a long ride this weekend, and I’m just so sick of dodging the multitudes of runners, children, and dogs on the Olentangy Trail.  Thanks to the nudging of a co-worker (thanks, Kristine!), I found a ride on the COP website for Saturday morning.  I was a little nervous – I didn’t know anyone and had never been on a group ride before – but I figured, it’s O-HI-30 style!

The ride left from a trailhead on the far west side of Columbus at 8 AM.  We rode eight miles to Der Dutchman for some down home breakfast (these are my kind of cyclists), and then headed out for another ~30 miles before heading back to the trailhead.  The group was made up of about 10 50+ year-old men and me, the only female!  I was also the only one riding a hybrid instead of a road bike (no suprise there), and I got made fun of for having a kickstand (they did convince me to remove it before my tri – it will save me five pounds!).  I definitely was slower than the group, but a couple of the men were kind enough to stick behind with me (I wasn’t THAT slow).  All in all, a great experience!  I’m already planning on joining the group again this weekend.  Need to get in those miles – it’s crunch time! 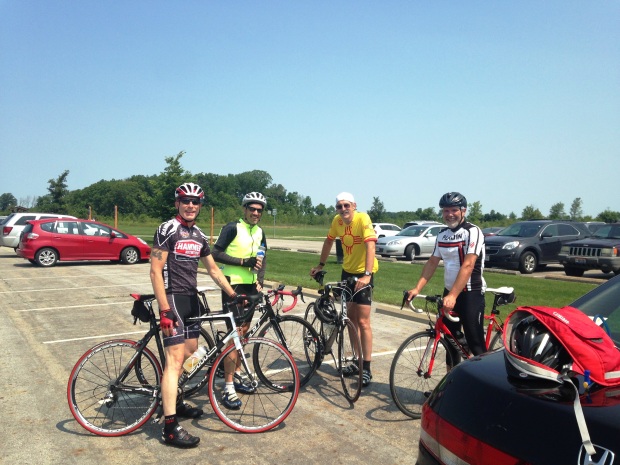 By the time we were finished, it was almost noon!  I hurried home to meet up with my Mom and Karen and a couple of Karen’s friends (Hi Terry and Cindy!) for the 32nd Annual Doo Dah Parade!  As mentioned earlier, I’m not usually in town Fourth of July weekend, so I hadn’t actually watched the Doo Dah before.  But I had definitely heard about it – my parents used to go back in the day, and Karen has been a regular spectator over the years!  Sadly, I was a bit disappointed.  Despite a plethora of political material in the news currently, there was barely any political satire – I didn’t see a single Donald Trump!   It was mostly weird people doing weird things.  But the Marching Fidels did make their annual appearance (with an “open for business” sign), as did The Supremes! 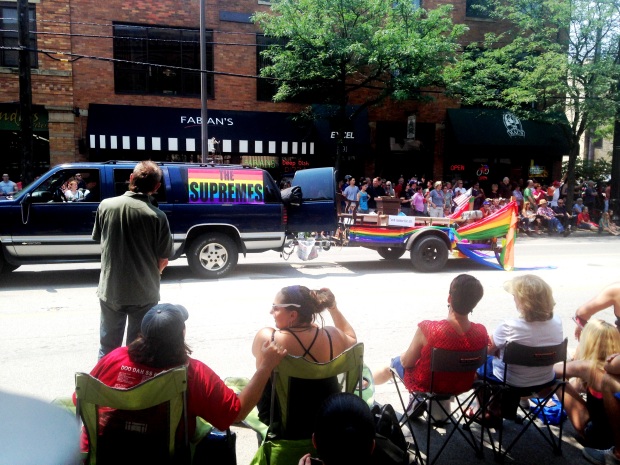 There was also this Jeep covered in wine corks.  And Liz’s Lemons – RIP Betty’s and Surly Girl!  Very clever. 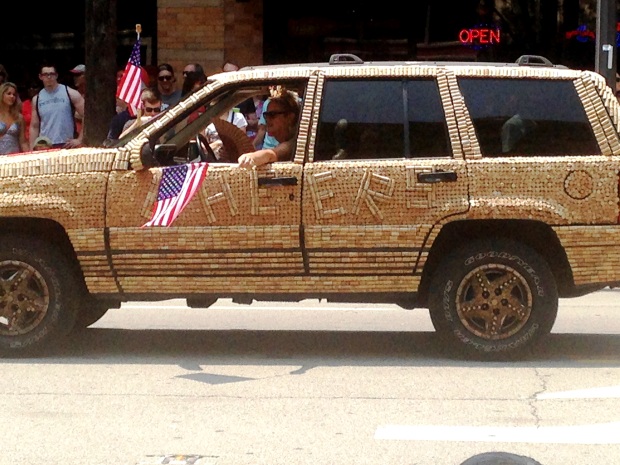 After the Doo Dah, we headed to Karen’s for a Fourth of July cookout that I failed to capture any pictures of, but trust me when I say it was very tasty!  Since Karen was man down, I was in charge of the grill – for the first time ever!  I grilled corn on the cob in the husks, turkey burgers, regular burgers, and dogs.  A success!  When I finally move out of my apartment one day, the first thing I’m doing is getting a grill.

Later that evening, my Mom and I walked to Jeni’s because I had a major craving for a hot fudge sundae!  Some people may think blueberry pie is the most American of all desserts, but I declare the hot fudge sundae with vanilla bean ice cream, hot fudge, nuts, whipped cream, and a cherry to be the true American dessert.  This majorly hit the spot!

All in all, a very nice way to spend a three-day weekend.  So tell me: blueberry pie, or hot fudge sundae?!