Four years ago this month, I taught my very first spinning class.  165 playlists later, countless “regulars” that come and go, and thousands of dollars in my pocket later, I’m still teaching with the same energy and enjoyment as that very first class!

I discovered spinning in late 2007.  I distinctly remember attending my first class at Lifestyle Family Fitness, thinking it would be “too easy” for my half-marathon running self.  Boy was I wrong!  I quickly got hooked to the music, energy, and challenge and started attending multiple classes per week.  My favorite instructor was a thin, tall, blond woman named Amory who had a great ear for creating playlists and was an excellent motivator.  When I was forced to leave Amory and join a gym with a pool to nurse yet another injury, I discovered that not all spin instructors were as talented as she.  On the contrary, many of them were just plain bad.  So in early 2010, it dawned on me – why not become a spin instructor myself?

The process to become a certified Spin instructor was not easy and required hundreds of dollars, many hours of classes and tests, and two auditions.  But after many months, I finally was scheduled to teach at the brand new Urban Active in Grandview on Monday nights at 7:15.   Today, four years later, I teach two classes per week:  Monday nights at 6:45 and Saturday mornings at 10:30, both at what is now LA Fitness.

For those of you who aren’t familiar with Spinning, Spinning is a trademarked name for indoor cycling classes.  Not all cycling classes are “Spinning” classes, and I’m pretty sure mine at LA Fitness isn’t anymore, but I am a certified Spin instructor.  But whether your gym calls it Spin or cycle, it’s basically the same thing:  a room full of stationary bikes, all set up to face the instructor, who guides the class through a series of resistance and position changes on the bike.  The class is set to music, usually self-picked by the instructor, which means that classes can very greatly from instructor to instructor.

I thought I would share some basics of Spin – if you come to my class (thank you!) or are a regular at your gym, this is old news to you.  Spinning cane be boiled down to just a few basics:  resistance, position, and heart rate.  At all times, you have some resistance on the bike, and you are in one of three positions:  seated, standing, or climbing.  The instructor varies these throughout the class, ideally in sync with the music, to create a high-energy, fast-paced class that is guided by heart rate levels.  In that way, Spinning suits the needs of both novice exercisers and triathletes alike.  In any given class, I might have someone who is brand-new to exercise and another who is an Ironman, and both can get a workout that is suited for them.  It is also low-impact, making it kind to the body and a great cross-training workout – especially for runners.

A “good” instructor will not tell their class exactly what their resistance level should be – instead, she’ll guide by “light / moderate / heavy” or some variation of that.  What is heavy to me is not necessarily heavy to the man next to me, and, thus, each person must adjust their resistance to what feels “right” to them.  Fortunately, the bikes at my gym have monitors on them that display RPM – pace – so I can easily guide by that – “you should have enough resistance that your RPM’s slow below 80”.  You get the idea.

As I said before, there are three positions in spin: 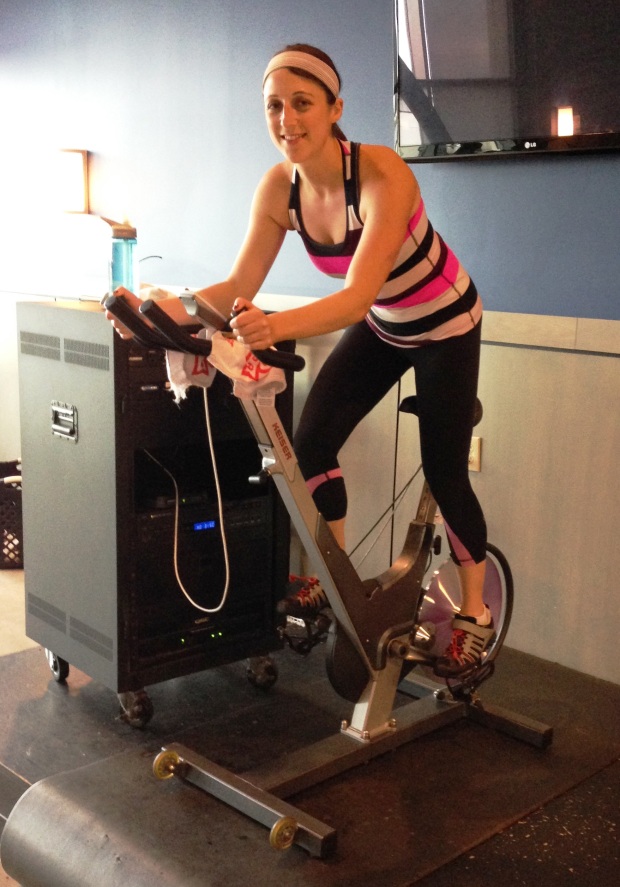 The basics of good form are the same in all three positions:

And I pretty much repeat those three phrases a million times throughout the class.  Of course, there are details and tips I’ve left out, but you get the idea.  Good form is critical in Spinning, and more often than not I see riders slacking.  They point their toes, or hunch their shoulders, or lean on the bike with their upper body.  I could go on and on.  The best advice I can give you is to LISTEN TO YOUR INSTRUCTOR!  I’m always amazed (and driven crazy) but the number of people who seem to pay no attention to my instructing – like I’m there just for the music.  Don’t get me wrong, the music can make or break a Spin class, but proper form and instruction is the most important aspect of any Spin class.

And speaking of music – it’s my favorite part!  I’ve always loved music and keep up with the top 40 of the past 20 years, as well as a variety of other genres, so I think I’m well-suited to teaching Spin.  I don’t even want to know how much money I’ve spent on iTunes in the last four years!  But I’m a huge believer that music is the #1 motivator in a Spin class, so it better be good – and it better make sense.  For example, the slow and consistent beat of Eminem’s “Lose Yourself” is perfect for a standing climb, whereas a fast-paced, clubbing song like Avicii’s “Levels” is more appropriate for a sprint.  I listen to the beat of the music and follow the melody and chorus – it’s amazing how similar so many songs are when you start to listen to them with Spinning ears.  When I first started teaching, I spent hours “practicing” on the bike, listening to new music and figuring out the best way to use it in class.  Now I can hear a song on the radio in the morning and play it in class that night!

A few weeks ago, one of my regulars, Lindsay (Hi, Lindsay!) was attending my Monday-night class on her 26th birthday.  To make her birthday a little extra-special (it was a Monday, after all), I asked her if she had any song requests for that night.  And boy did she ever!  To my amusement and enjoyment, Lindsay texted the most epic song request list of all time:

Let me tell you, she sure made creating that night’s playlist easy!  The end result looked like this: 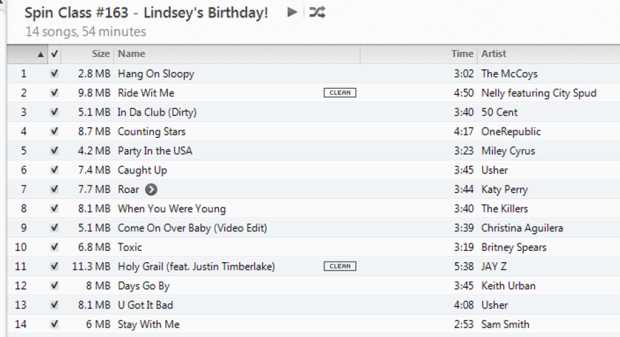 If you’re curious, each song maps to a Spin movement as follows:

LA fitness guidance is that class, including warm-up and cooldown, should last ~55 minutes, so I aim for my classes to be ~45-50 minutes of work.  This usually results in 12 “working” songs, which I break into thirds. Sometimes the first third is longer than the second two, and I don’t always follow the same pattern, but the example above is pretty typical.  I try to create a new playlist every week – of course, that doesn’t mean I have new music every week, but after years of teaching I’ve built up a pretty large music selection.  The only song that I repeat on the regular, without fail, is my beloved “Call Me Maybe”.  My class knows that I play it once every six weeks – no more, no less.  It’s my class and I’ll play what I want to.

That, folks, is a crash course in Spinning!  I feel as though I barely scratched the surface – there is so much I could tell you about – like the time an older man in my class told me that he attributes his PR in the Boston Marathon to taking my class (best.  compliment.  ever!)  If you’re in the Columbus area, check out my class – you can print a 3-day guest pass here. And if you’re not, I encourage you to check out your local cycling classes – if you find the right instructor, I promise you’ll have fun – and get a great workout, too!

Do you take Spinning classes?  What’s your favorite song to Spin to?