Halloween
Call me unAmerican, but Halloween is not my favorite Holiday.  As creative as I might appear at times in this space, don’t let me fool you – I’m not really creative.  At least not when it comes to things that require me to be crafty.  Words, maybe so, but don’t you dare ask me to sew or knit or make a wreath for my front door.  So, naturally, Halloween brings up all sorts of anxiety that I’d prefer to just avoid entirely.

Alas, I was invited to Halloween party this past Friday where I was told there would be “designers” present – aka, people with incredible costumes.  Blood pressure rising.   I couldn’t attend said party without a costume – who wants to be that person? – so I racked my brain.  What could I be that was a. somewhat clever b. not purchased at Party City for $50 c. somewhat meaningful and d. not slutty?  If I think about my favorite costumes from previous years, they include a massive pumpkin (hilarious) and political figures (Sarah Palin and Ann Romney – I have a thing for conservative women).  I debated re-creating my Kelly Kapowski costume from senior year of high school, but that would require multiple trips to Goodwill, and that just didn’t sound like fun.  Plus, who is Kelly without Zach?

I was lamenting about this to Matt, and he came up with a wonderful idea – “Why don’t you dress up as a crazy cat lady?!”.  I mean, I pretty much already am one – so much so, that my friend Cullen gave me a t-shirt that says “Ask me about my cat.”  With that shirt as the foundation of crazy cat lady’s costume, I set out to purchase some plush cats from Amazon, Velcro tape, and slippers – and this masterpiece was born:

What you can’t see is that my socks have cats on them (already owned, obviously) and that I have five cats attached to me – in the hood and pockets of my robe in addition to the ones you can see on my arm and head!  I also carried some jingly cat toys (again, already owned, obviously).  The costume, while not remotely sexy, was funny – and enough of a hit that I didn’t feel completely out of place, which of course is the goal at a Halloween party.  And I was pleasantly surprised to find that most of the costumes at the party where in the same range as mine – and some were even more lame!   #winning.  360 days until I have to come up with another Halloween costume!

Side note – yes, that is a beer pong table in that picture.  #college

Cleveland
On Saturday, my friend Caitlin and I drove up to Cleveland to attend a “political gathering” of sorts with my parents and some of their like-minded friends.  In effort to keep this a mostly bipartisan space (with the exception of this post), I won’t get into the details of our evening.  But suffice it to say I’m glad we made the effort to attend – it was interesting to say the least.  The following morning, we joined my parents and their friends Riana and Frank on their version of Sunday Church – a walk around Cleveland!  We walked five miles (I ran some) along the lake in Edgewater Park and into Ohio City, where we ended up at Town Hall for brunch. 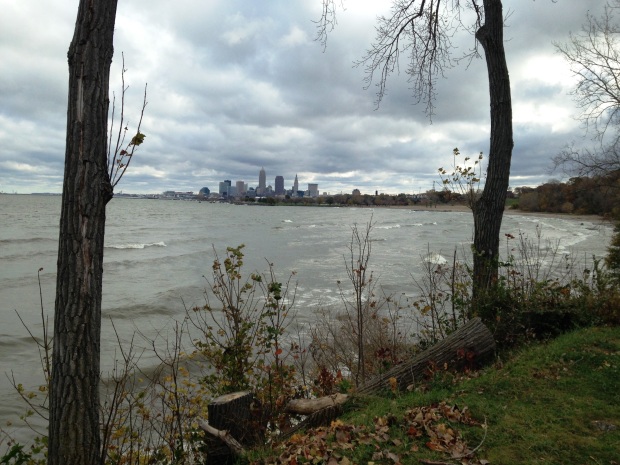 Town Hall is on W. 25th St. in Ohio City, one of the up-and-coming areas of Cleveland.  If I were living in Cleveland, I would probably live there (or maybe Tremont).  The West Side Market is located there, as well as a bunch of new restaurants and my beloved Mithcell’s Ice Cream (future post!).  After being seated at another restaurant, we got a call that our table at Town Hall was ready (10 minute wait instead of the 45 they quoted!), so being the Chait’s we promptly left our table (no drinks yet, don’t worry) and headed over to Town Hall.  And I’m glad we did – it lived up to my parent’s hype!

The place was packed with Browns fans (the game was on at one, and we won!), and the atmosphere was lively and cozy.  Check out the brunch menu (part of it): 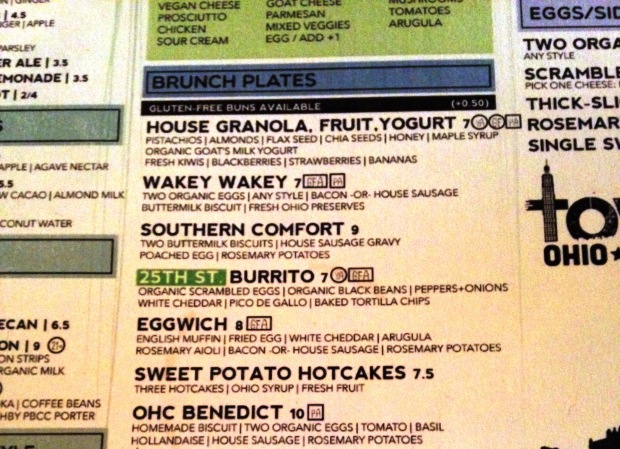 I opted for the Eggwich, and was not disappointed!  The English Muffin was baked in house, elevating an otherwise fairly simple egg sandwich to a whole other level. 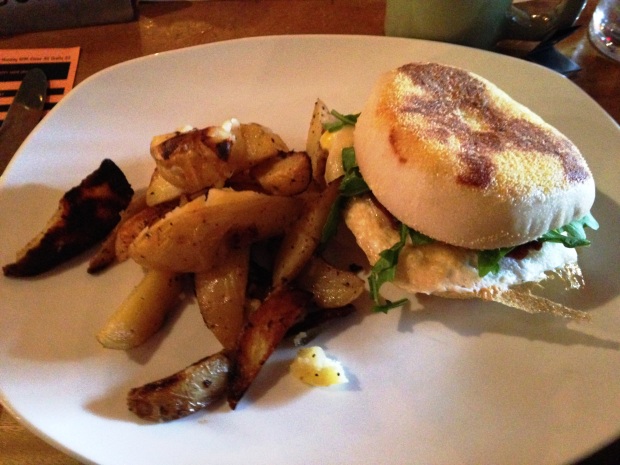 I was very impressed with Town Hall – and Cleveland, in general:)  Don’t worry, though – I’m not moving back any time soon 🙂

And, finally, I leave you with a picture of my voting location this morning.  I heart my polling location – it’s literally next door to my apartment building, so all I have to do is drop off my bags in the car, walk over, vote, and walk back to my parking lot to head to work.  There was no line today (suprise, suprise – although one formed behind me), so the whole experience took maybe seven minutes.  There is just something about voting in person on Election Day that I love – feels like I’m a part of something greater.  I love it even more when I have to wait an hour or two to vote for the President – Hillary 2016, baby!  (What was that I said earlier about bipartisanship?)

Did you vote?!  I certainly hope that O-HI-30 readers are the voting kind 😉