Hi, friends!  Just popping in for a quick post, as opposed to the novel that was my triathlon recap from earlier this week!  If you read it in its entirety, you get extra points.

I don’t know about you, but I’m thrilled that it finally feels like summer outside.  For the life of me, I can’t understand why people are complaining about the HEAT!  Do they really have that short of memories?!  It’s JULY, it’s supposed to be 90 and sunny!  I’m a big believer in embracing seasons and their food.  And nothing says summer more than ice cream – and smoothies! 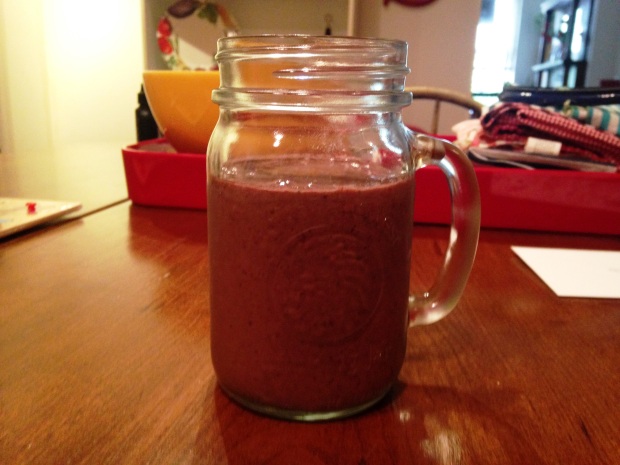 I’ve never been a huge fan of drinking my calories.  I find chewing much more satisfying.  There is a Planet Smoothie in my parking lot at work, and some of my co-workers go there for lunch to suck down a 500 calorie sugar bomb.  I don’t get it.  If I did that, I’d be reaching for a bag a chips 30 minutes later!  That being said, there is a time and place for everything, and lately I’ve found myself craving smoothies.  Something about this heat makes a cold berry-licious smoothie sound tempting.

But rather than buy a sugar and calorie laden one from a fast food joint, I make my own!  By doing so, I can control what goes in it (duh), and keep the junk at bay.  It’s also a great way to use up ripe bananas.  I often find myself in limbo with bananas – one day they they are bright green (gross), and the next, covered in brown spots (too much, even for a girl who likes spots).  But throw a ripe banana into a smoothie, and you’ve got perfection!  I also peel and freeze them for the times when my banana stock is green or non-existent – frozen bananas work just fine in smoothies.

And here’s the best part – drinking smoothies is also a great way to drink your vegetables!  Even if you eat a healthy diet, it can be hard to make room for all of your kale every single day.  But you don’t have to buy a fancy juicer or pay $10 for a beet/carrot/ginger juice to add some veggies to your diet.  Just add a handful of spinach to your next smoothie!  I promise you you won’t taste it at all – and if you use enough berries, you won’t even see it!  Even kids could be fooled.

When I told my brother about my go-to smoothie, he was skeptical.  “Isn’t that a lot of sugar?”  Yes, there is sugar in my smoothie.  But in my opinion, there is a big difference between the natural sugars in bananas and frozen berries and the added sugar that is so prevalent in American diets.  This smoothie contains no added sugar – not even a squeeze of honey (although you could certainly add it!).  I find that it’s sweet enough as-is. 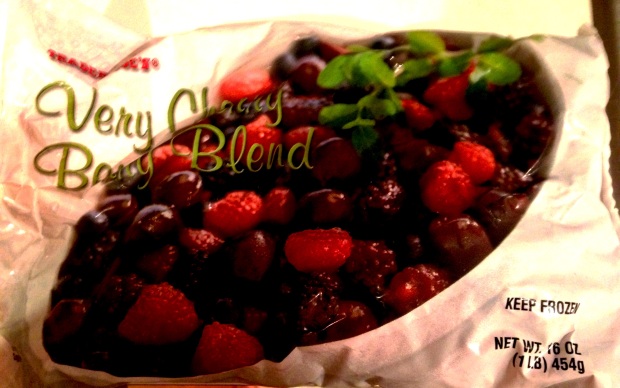 A few years ago I bought a decent blender for about $100 bucks (KitchenAid), and it does a perfectly fine job – no need for a fancy Vitamix to make your basic smoothie.  Throw all of your ingredients in the blender, being sure to add the ice first so it’s closest to the blade.  Run the “crush ice” mode for a few seconds before switching to liquefy, adding milk until the smoothie reaches a drinkable consistency.  Pour into a glass (ideally a clear glass so you can appreciate your smoothie’s beauty), add a straw, and sip away!  Enjoy as a snack on its own, or with some food that requires chewing for a more hefty snack / light meal! 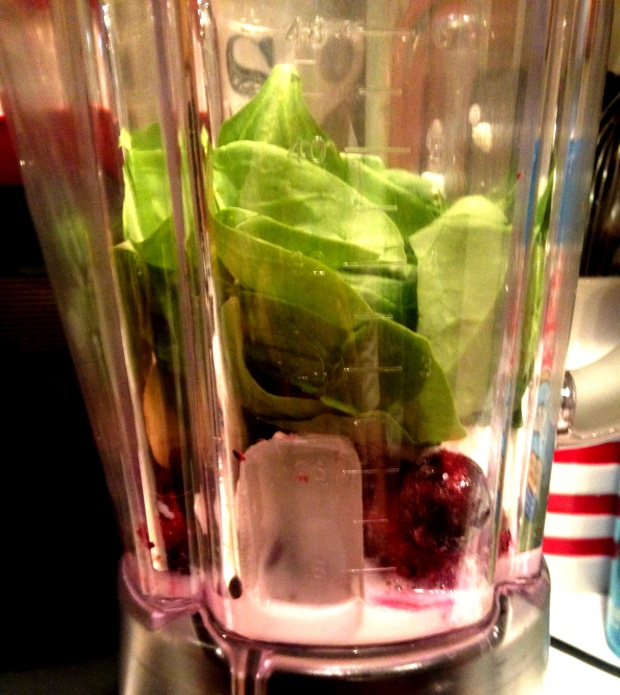 Are you a fan of smoothies?  What’s your go-to?