Recall that I made a promise to you, my O-HI-30 readers, that I would let you know when I rejoin match.com.  Well, as of a few weeks ago, that time has come.  And what better way to celebrate this slightly depressing yet promising occasion than with the final part in my five-part Online Dating series?!

In case you are new to O-HI-30 or haven’t been reading since the beginning, my Online Dating series is just as it sounds: a series of posts dedicated to my experiences in the online dating world.  You might say it’s even expert advice on how to navigate this mysterious world.  What makes me an expert, you ask?  For one, I’ve been dating online since the fall of 2009 (off and on….mostly on).  And second, I’ve tried plenty of dating sites.  There’s Tinder, not exactly a dating site but more of a “hot or not” app; OKCupid, a site that proves that “free” oftentimes equals low quality; JDate, for The Chosen Few (and by few, I mean VERY few); and finally – Match.com, the site that started it all, and the subject of this post.

At this point, reader, you may want to take a moment to review Online: Part I, in which I summarized these four dating sites.  The main takeaway?  Quantity vs. Quality. 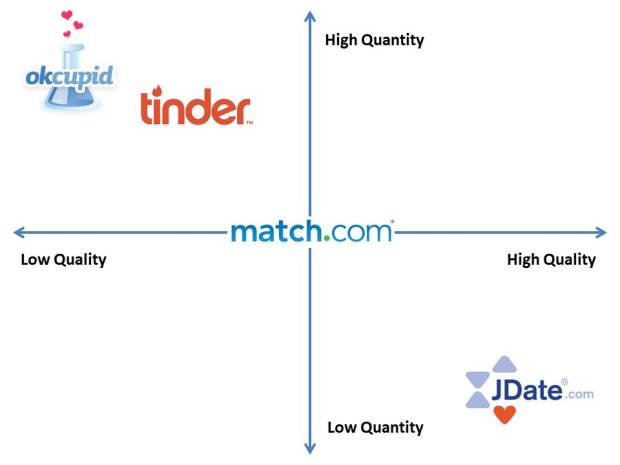 Notice the presence of white space in the top right quadrant – there are no sites, in my opinion, that are both high quantity of men AND those men are high quality.  After all, there aren’t that many wonderful single men out there in the first place, let alone on dating sites!  You’ll also notice that match.com is smack dab in the center – also known as the origin, for you math buffs out there.  There aren’t millions of men on the site like OK Cupid, but there are significantly more men than JDate.  And while there are certainly some lame dudes on the site, there are also some pretty quality ones too.

Match.com doesn’t just fall on the origin of my Quantity vs. Quality map, but it also was the origin of online dating when it entered the world in 1995 – and the origin of my online dating when I entered the world in 2009.  It’s no coincidence that when I was ready to rejoin the dating world after my breakup this past spring, I joined Match and not one of the handfuls of other sites out there.  Although it’s far from perfect, and I’ve yet to meet my husband on the site, it’s also as reliable a site as I’ve found.

In case you haven’t had the luck of trying Match.com out for yourself, let me give you a brief tutorial.  First things first:  Match is not really a matching site.  “Say what?!”  eHarmony (from what I can tell) is – they spend hours trying to figure out who the perfect men are for you based on an extensive questionnaire.  OK Cupid is a match site to an extent.  But Match?  Match’s idea of matching is “you both like basketball” and “you both enjoy coffee and conversation”.  If that’s the case, then I match with half of the population!

So if not a matching site, then what is Match.com?  I’ve always thought of it as more of a “Filter.com”.  That is, I can narrow down a wide range of men to just the men that meet some defined criteria, thereby “filtering” out the ones I’m not interested in.  It’s like going to a party, but all of the men at the party are single, childless, want to have children one day, at least 5’8″, non-smokers, social drinkers, non-religious, and liberal.  That may sound extreme to you, and let me assure you – it is!  But that’s the beauty of it.  Rather than sift through the 2000+ men that are ages 27-39 and within 10 miles of my zip code, that filter lets me narrow the list down to ~250 men – a much more manageable number.

Now before you go giving me lecture #891 that I’m “too picky” or “missing out on some great men”, let me assure you – I’m not.  Because if a man happens to wink or email me that isn’t in my query, that’s fine!  I’ll still see him, and if he interests me, great.  The filter just lets me narrow down the number of men I see – and 250 is plenty of men to sift through.  After all, I’m a fabulous girl with a fabulous life – who has time to search through 2000 men?!  And besides, 250 sure beats the 35 on JDate!

Let’s pause for a minute to take a look at my profile.  I thought it would be fun to show you guys my “public profile” view – the view that all the hot men trolling my profile see:

The above highlighted part?  Maybe now you can see why I don’t consider Match to be much of a matching site…this isn’t exactly groundbreaking stuff.  That’s why, in the “in your own words” section, I try to give some color and insight into who I am in what I think is a unique and meaningful way.  Occasionally I’ll get an email from a guy who comments on it – “I like your lists”.  You’ll also notice that I fail to indicate my faith as “Jewish”.  That’s partially because while I identify as a Jew and clearly take part in the customs (see this and this), I am not what I’d consider a religious Jew. It’s also a result of a social expert I conducted a number of years ago – I discovered that I got more attention on the site when I left that attribute blank.  I guess men are afraid of JAPs? (which, clearly, I’m not one…clearly).

So let’s get back on track.  You might be thinking, “so if Match is so great, Sarah, then why haven’t you met your husband by now?”  Good question.  I may not have met my husband yet, but I have met some fairly high-quality dudes thanks to the site.  The first guy I dated on Match ended up being one of my longer and more successful relationships (not that it takes much given my track record).  The guy I dated just before Wyatt was a match find, and he was definitely a high quality guy – an econ professor with a $300K house in German Village and impressive cooking skills (not to mention kissing skills…).  And there were plenty of other decent men in between.

But before you get excited and join Match immediately, I must tell you that there are certainly your fair share of not-so-great dudes as well.  I’ve been on so many first dates I can’t even recall most of them.  And I’ve received ten times as many winks and emails from not-so-great men (most of which are probably on Tinder and OK Cupid too).  For example, just recently I received an email from a seemingly normal guy.  I was planning to respond, but when I hadn’t in less than 24 hours, I received this follow-up:

Not surprisingly, I chose not to respond.  Which turned out to to be the right call, as two weeks later, I received this:

Really?!  Where is your pride?  If a girl (or guy) doesn’t respond to you, move on!  Unfortunately, I didn’t follow my own advice and decided to let this guy know exactly what he said that was so bad that I didn’t respond.  What can I say – my fingers were furiously typing a well-crafted email informing him that he was rude and lacked self-confidence before I could stop to think if it was really worth it.  To which he replied:

Rude, huh?  Sounds familiar.  And blocking me?  Boo-hoo – I clearly am so upset about not being able to contact you.  Needless to say, this is my most f-ed up interaction I’ve had with the opposite sex online to date.  And that’s saying something!

It gets better.  Recently my friend Jackie, also a long-time match subscriber, got an email from a guy she had gone on one date with last summer.  He used her first name, so clearly he remembered her, but didn’t acknowledge that they had, in fact, met before.  So Jackie playfully pointed out the elephant in the room, “didn’t we meet up once last summer at xyz bar?” to which he replied “yes, we did.   I had a good time, so that’s why I’m writing you – I’d like to take you out on a second date”.  WHAT?!  He had a good time and he’d like to take her out on a second date…a YEAR LATER?!  We’ve all heard of the three-day rule, but the one-year rule….

Oftentimes, the rejection goes the other way.  Right before I met Wyatt last fall, I had a string of very bad luck in which I sent nine emails to nine separate men, only to hear back from zero.  Yes, ZERO.  That rejection, coupled with the rejection from the aforementioned econ professor with the amazing house and cooking / kissing skills, was enough to inspire one of my personal favorite posts on this blog.

So, no, it’s not all rainbows and butterflies on Match.com.  Just like any dating site, the men that email you never seem to be the ones that you want to email you, and the men that you email never seem to respond.  And even if you do have enough of a mutual interest to meet in person, more than half of the time that interest dies after the first meeting.  It’s rough.

But as you know from another personal favorite post, I’m a believer in the numbers game.  You have to meet a lot of people before you meet “the” person.  And that’s why I keep coming back to Match.com.  Sure, it can be depressing at times, especially after having been on the site for so many years – the same people keep appearing (the same can be said for me), all parading their failure to find lasting love.  But after every failed relationship or string of bad dates, Match gives me hope that my guy is out there, along with 250+ other suitable suitors!  Going on a date is a powerful reminder that you’re putting yourself out there and living your life instead of waiting around for your life to happen to you.

So thanks, Match.com, for taking me on lots of dates over the years, for making me laugh, for making me cry, and for potentially introducing me to my future husband.