I spent this past weekend on the East Coast, visiting my Aunt/Uncle/Cousins on my Dad’s side: 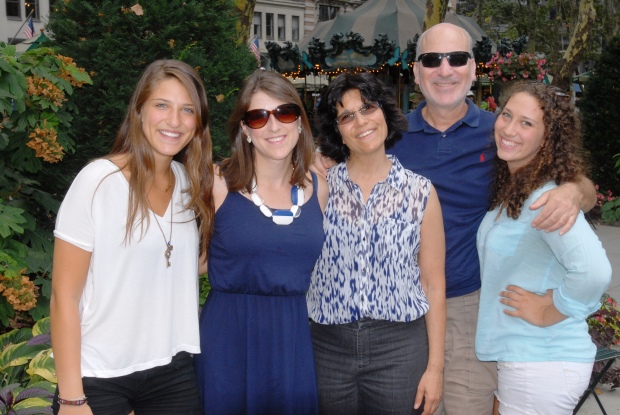 From Left to Right: Talya, me, Neva, Yossi, Atlee

We had a fabulous weekend talking, laughing, SHOPPING (it was tax-free weekend in Massachusetts!), and generally just enjoying eachother’s company.  Atlee is about to move to Israel to work for five months (or longer…) and Talya is starting her sophomore year at that school up north, so it was extra nice to spend time with the four of them all in one place.

On Sunday, we drove into NYC for a family reunion on Neva’s side of the family (Yossi is my Dad’s brother).  I had heard through the family grapevine that Maurice (my cousin’s cousin) had met his wife on eHarmony, and it didn’t take long before we were discussing the woes of dating.  Maurice showed me a contact in his phone – “Aaa unnamed”.  Turns out “Aaa unnamed” is his WIFE.  Years ago, when he first met her, Maurice was too jaded to believe that she could actually be “the one” – so much so, that he wouldn’t enter her name into his phone, preferring to keep it as “Aaa” (so that she would be at the very top of his contact list).  I assume that Maurice’s fear that it might end poorly like so many “Aaa”‘s before her dissipated at some point, but by then it was an ingrained habit – so Lisa became “Aaa” for life.

Maurice put it simply:  “It’s a numbers game.”  The idea being, you might have to meet a lot of people before you finally meet the right person.  Of course, it’s not a numbers game for everyone – for some (very few), it only takes one; for more, it takes some.  But for those of us that find ourselves dating at age 30, it is most certainly a numbers game.  The more dates you go on and the more people you meet, the more likely you are to meet the person you want to spend the rest of your life with.  This might not sound very romantic, but it’s logical – and I, for one, have always liked math.

The problem with the “numbers game”, however, is that over time, playing it gets tiring.  One bad date or short-lived relationship after another becomes the status quo.  You get excited about someone new, and then before you know it, it’s on to the next one. You find yourself choosing to sit out the game entirely for weeks or months at a time, just so you don’t have to be disappointed again.  Factor in years and years of playing the numbers game, and you can understand why a person might become a bit….jaded.

I, for one, have been playing the numbers game my entire adult life, and have every reason in the world to be jaded.  Last year alone, I was stood up on four distinct occasions (that I can remember – there were probably more.  And to be fair, I’m talking the 2014 version of being stood-up; you make tentative plans (mini-golf on Sunday), and then the person falls of the face of the earth, never finalizing said plans and thus leaving you hanging).  I’ll send ten Match.com emails, only to hear back from one – or maybe zero.  I’ll go on two, three, four dates with guys that I feel lukewarm about, hoping that my feelings will grow in time – they almost always don’t.  Even my attempts at “casual” relationships backfire – apparently I don’t give off the “casual girl” vibe.

The point is:  I have every reason in the world to be jaded.

But you know what?  I’m not the least bit jaded.  Despite all evidence that my next date is probably not going to be more than just the next number in my game, I can’t help but be an optimist.  This one could be different!  And so despite my better judgment, I let myself get excited for each and every date, each and every guy.  Yes, that might mean I’m setting my expectations too high.  Yes, that might mean I’m setting myself up for disappointment.  And yes, that might mean I’ll get hurt.  But that also means that I’m setting myself up for the possibility that none of that will happen.  And it’s that possibility that keeps my head held high, a smile on my face, and my eyes wide open.  After all, it only takes one.

And who knows – maybe my next “Aaa unnamed” will remain in my phone for life!